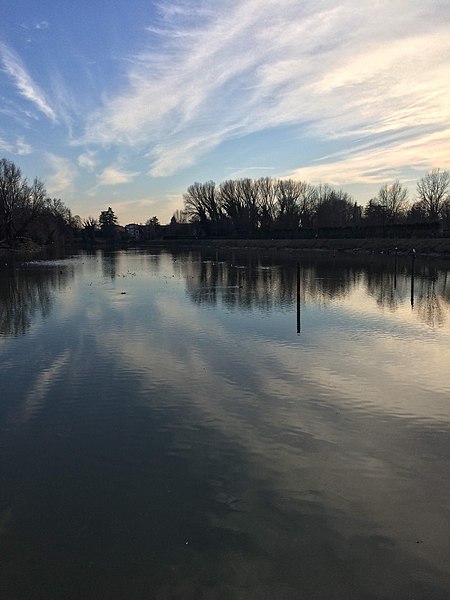 The cultural exchange with the students from Bonn continues: today we go on a bike ride to discover the Restera…
Here are some interesting facts we want to share:

The Sile, a resurgent river that from Treviso crosses and laps small towns, the countryside and the lagoon before reaching the sea, owes its name to the placid and silent flowing of its waters, so regular that for centuries it served as the primary transport route for goods between Venice and Treviso. But while it did not take much work to go down, to go upstream with the boats, including the so-called ‘burci’, one had to rely on the strength of oxen or other animals, which pulled them from the path along the river.
The path along the Sile is called the “Alzaia”, or “Restera” as it is locally known: in both cases the name, of Latin origin, derives from the rope with which the boats were pulled against the current.
For a few years now, Restera has also made up the most beautiful and fascinating part of the so-called “Sile Greenway” – a cycle path that follows the entire Sile river from the resurgences near Casacorba to the sea between Jesolo and Cavallino – .
In such a context, the ‘Restera Art District’ was created: street art to enhance and make unique the promenade along the Sile, like an open-air museum.
Street art is a particular form of expression of modern art that manifests itself in public places, (sometimes even without any authorization), using a variety of techniques including: spray cans, stencils, acrylic paints with brushes, etc.
Its origins are unclear, but certainly in the 1970s in the suburbs of New York we began to witness this socio-cultural phenomenon and it was not until around the year 2000 that there was a real explosion of street art, above all thanks to the British artist Banksy who began his career as a street artist by painting the streets with the help of stencils. He also incorporates and transforms everything found in the streets in his works, such as street signs, manhole covers, doors and other objects, thereby creating beautiful works of street art, enhancing and harmonizing the street furniture in a significant way.

First of all, one must ask oneself what a ‘burcio’ is.
The burcio is a large boat… Its maximum dimensions could reach a length of 35 metres and a width of 6.5 metres.
The burcio was a flat-bottomed boat, suitable for river navigation, especially for commercial transport.
It was built using hardwood, which provided moisture resistance for the main structures, and softwood, which was more elastic, for the parts subject to impact.
The outer part, immersed in water and impregnated with pitch, was black and the sides were brightly coloured and sometimes decorated.
The three men needed to carry the burcio were the ‘paròn’, the ‘marinéro’ and the ‘morè’.
The ‘paròn’ was the captain, the ‘marinéro’ (sailor) performed the manoeuvres and the ‘morè’ (deckhand) took care of the meals and cleaning.
The burcio was both a home and a working tool. Although the space was tight, nothing was lacking. The accommodation was located at the stern and was reserved for the ‘paròn’, the head of the ship by seafaring custom.
For resting there were bunks, sheltered as best they could from the humidity with tarpaulin.
For warmth, it was quick: the “cheap kitchen” in which wood burned ensured warmth.
The Burci cemetery is an archaeological site in the province of Treviso, in a bend of the river Sile. The Burci Cemetery is located within the protected natural area of the River Sile Regional Natural Park.

Archaeological research carried out between 2014 and 2015 revealed that 13 burci, traditional transport boats, were abandoned at the site between 1974-75.

The river Sile was the main connection route between the Marca Trevigiana area and Venice from the Middle Ages to contemporary times. River transport of goods and merchandise on the river Sile has been documented since Roman times; the use of burci and other transport boats continued to be documented in Veneto regularly until the 1970s, only to be supplanted by the advent of road transport. Veneto was the last of the Italian regions to abandon river transport.