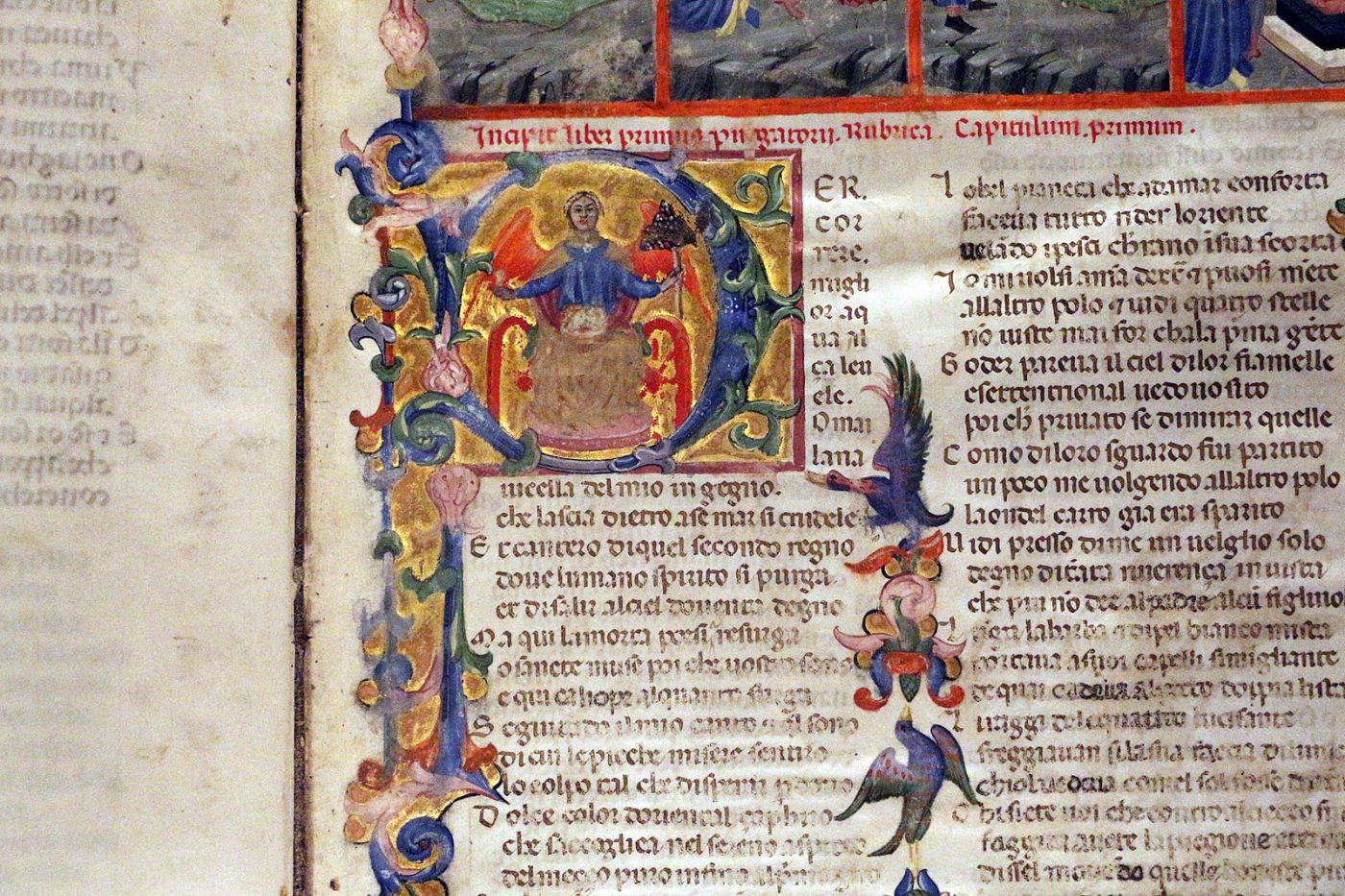 By miniature is meant any illustration and decoration created by hand on a support intended for reading, that is a text.  This elegant and intricated artistry takes its’ name from the Latin term ‘minium’, a particular red pigment used to outline the initials of the pages.

The last comes from the colourless gland present in a specific mollusc typical of the Adriatic Sea, the ‘murex brandaris’, which turns red when exposed to the sun. The more the secreted liquid is exposed to the sun, the more it becomes indigo: the second most precious colour to cover illuminated manuscripts.

There are three main things to know about this kind of decoration:

The time of usage of the manuscript [which means written (scriptus) by hand (manu)] was, above all, that of the Middle Ages. Therefore, the time of the miniature corresponds to those periods up to the introduction of printing, which took place around 1470.

However, even if the miniature is an art representative this time period, it is not a medieval invention: the ancient Egyptians decorated the papyri that accompanied the deceased to the afterlife, so it is safe to say that this gorgeous practice stems from that.

Now, no illuminators are truly known in late antiquity, only the scribes are. However, from the 10th century onwards, evidence of their presence increases as the illuminators start to represent a lot of themselves, as if they understood the importance of their work. Copyists and Illuminators often left their name and the date in the colophon, which is back of the title page.

This is due to the fact that the Middle Ages gave the book extraordinary importance and attributed a sacred function to it.

Although abbots, bishops and monks played an enormously important role, miniature painting was also practiced by laymen. There is an example of a Bohemian sacramentary dated 1136 in which, depicted together at the bottom of a page portraying Gregory the Great, the scriptor is a monk and the pintor and his helper are layman.

The preparation phase is long and tedious for the person who does it. It starts with the preparation of the parchment, which was the processed skin of sheep, goats, or calves. These were soaked in limewater for three to ten days, to then scrape away the remaining hair and animal flesh. After this first process, the skin was soaked in fresh water and then stretched on a frame to be scraped again until it got dry. The now parchment page was then smoothed and cut. To start writing, the page had to be ruled with a straightedge as to avoid imprecisions, and only after the writing was done the text was bound and decorated as the final step.

The tools used by Illuminators (some of them shared with the scribes too) were many:

There were two main techniques used: the first was to simply start drawing on the support with the lead stylus, the second was to first prepare the sketches (usually on wax tablets) and then trace the design with black ink.

Whichever, the outlines were always first, followed up by the gilding and lastly the colours.

4 main supports are utilised for illuminating: Papyrus, which derives from the plant ‘Cyperus Papyrus’. It is the oldest support known, though it’s kept rolled up as it’s difficult to maintain stretched.

Then there’s paper, known in China since the 2nd century but never really used in Europe until printing came to be. It was produced by the distressing processing of linen threads.

Another one is parchment, of which we talked about before, that’s the most common support used.

The miniature (meaning the gilding and the colours) need binders of animal or vegetable origin which allow them to dry out. The most known are Gum Arabic, whisked egg whites, isinglass and honey.

The gilding, that is the usage of gold in miniatures, can happen through 3 techniques:

the most known is the Golden leaf technique, where after applying a binding agent to the support, a golden foil is applied to it, then the excess gets scraped off.

Another technique was the shell gilding, where the support is decorated with the use of powdered gold or metal. Lastly there’s chrysography, where the gold is pulverised and then dispersed in the colours.

So, let’s talk about colours!

There was a high variety in pigments at the time. All the dyes, in order to be made stable, were fixed with rock alum and then mixed with one biding agent (mostly egg whites).

The main colours used are:

One thought on “🇬🇧  “Illuminated manuscripts””